Get to know the Senior Pastor of ACTS Ministries 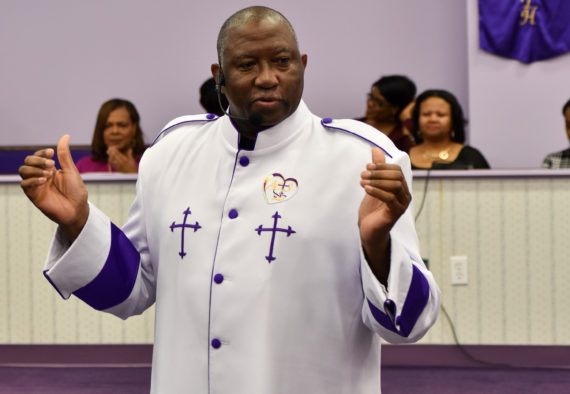 Frank H. Stewart is an award-winning author, philanthropist, media personality, and beloved pastor and Suffragan Bishop.  He deposits into the lives of thousands of individuals each week as the senior pastor of two churches in Central Arkansas and is the host of a daily radio broadcast, “Words to Empower” and the weekly VTN television broadcast.  In part, it is his heart for ministry and desire to care for the fatherless and widows that have been the catalysts for expansion of his influence in his church, community, state, and nation. His recognition that “if not for the grace of God, there go I” inspires him “to reach back and to lift up” others from a victim’s mentality to a victor’s position.  The senseless death of his father–while his mother was pregnant with him–birthed a commitment in him to help the fatherless child and to help the single mother help herself. This burden for single mothers and fatherless children inspired him to pen the book “Father Deficiency,” an exploration of the impact of parental deficiency on this generation’s outlook and outcomes in life.  He has also authored numerous books that focus on the family (including “The Building Blocks for a Successful Relationship” and “Family Under Attack”), and the ministry (“The Power of Prayer,” “Exploring the Holy Spirit,” “The Church is a Hospital,” and “The Rarest Jewel”). His book Father Deficiency won the AIDA Ford Scholar Book Award from the PAW Christian Education Association.  While that book garnered national recognition from iconic figures like TD Jakes and Roland Martin, he is most thankful for the impact his ministry and books have made in the individual lives of members, their families, and those who share in his television and radio ministries.

Pastor Stewart has maintained a servant’s heart throughout his ministry. He emerged from humble beginnings in Forest City, AR and relocated to Oklahoma City, OK. In 1990, while at the pinnacle of his career, he was inspired to leave a lucrative management position in Oklahoma City to found the Agape Community Church.   With only three members in the audience–his wife and two children–he began preaching in the college town of Conway, AR.  As he humbled himself and served over the years in various capacities of the Arkansas District Counsel of the Pentecostal Assemblies of the World (PAW), he was promoted to new opportunities. In 2006, he opened another church in Little Rock, AR and in 2009 another in North Little Rock. While pastoring, he also sowed into the lives of other pastors and their ministries.  His compassionate sacrifices into the lives of his fellow pastors as a mentor was noticed by his peers leading to his promotion to District Elder in 2009.  Since that time, he has been elevated to Suffragan Bishop.  In 2014, he was selected by his peers in the Pentecostal Assemblies of the World (PAW) to be the Chairman of the Arkansas District Counsel of the PAW.  While the ministry has experienced tremendous growth and his influence has exponentially expanded, Pastor Stewart has held fast to the scripture of Matthew 23:11–“The greatest among you will serve”.  His adherence to this creed inspired him to rename the church “Agape Community Temple of Servants” (ACTS). He desires to pass the baton of “leadership through service” to the membership as well.